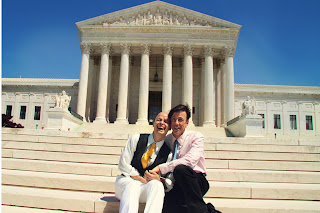 Award-winning documentary, Married & Counting follows two New York men as they travel the country to get married in every state where same-sex marriage is legal.

"Equal parts love story and political protest" (TIME), Married & Counting follows Pat Dwyer and Stephen Mosher as they load up a van with a dozen of their friends and take to the road for a running total of #8weddings-- one in each state that will let them. The Huffington Post called the film: "one of the most relevant, heart-felt and timely documentaries of the year... a brilliant gem."

The film premiered at the Rhode Island International Film Festival, where it won the Youth Jury Award for Best Feature, and the Ambassador Award for promoting cultural understanding. It is narrated by George Takei (Star Trek), who can soon be seen in the Broadway musical, Allegiance.

Married & Counting opens in New York on April 26, Mosher and Dwyer's twenty-seventh anniversry. Film Director Allan Piper and/or the grooms will be present for Q&A at every 7:15 showing. It will be released widely by FilmBuff this summer.

CONTACT:
Director@MarriedAndCounting.com
Posted by Married and Counting at 1:39 PM No comments: