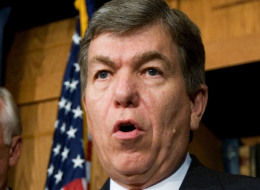 The bill's broad language would allow any employer (religious institution or not) "to decline coverage of specific items and services that are contrary to the religious beliefs of the sponsor." Opponents of this legislation have focused largely on its impact on women's access to preventative care. However, since the bill allows exemptions for any services that conflict with the employer's religious beliefs, it also could allow employers in states where same-sex marriage is legal to deny health coverage to same-sex spouses of its employees.

The Missouri Senator proposed the measure as an amendment to a highway spending bill currently under debate. The amendment is expected to be defeated.
Posted by Married and Counting at 10:02 AM 1 comment:

A year ago on Valentine's weekend, Pat & Stephen got married in Massachusetts. As a wedding present, they received an ice-skating lesson. Here's a sneak peek.

Posted by Married and Counting at 6:05 AM No comments:

In honor of yesterday's ruling on Prop 8, here's another sneak peek.

Posted by Married and Counting at 5:39 PM No comments: